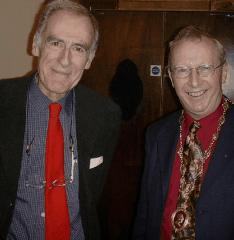 At the Royal Museum Lecture Theatre,
Chambers Street, Edinburgh
on Monday 24th November 2003, at 7 pm
(Doors open 6:30pm)
Enter by the Lothian Street Door, at the rear of the museum

This lecture will represent one biologist's survey of the emergence and early history of our species. It is based upon his recent introduction to earth science and archaeology through working for the BBC. It can be only a personal selection from a huge variety of topics and phenomena, but will attempt a sequence and hence the title.

Aubrey Manning is a remarkable scientist. In a long and distinguished career he has contributed greatly to the understanding of animal behaviour, has inspired generations of students through his teaching and has become one of this country's foremost science communicators through the medium of television. He is currently presenting a series on BBC2 entitled "Landscape Mysteries". His lecture will represent one biologist's survey of the emergence and early history of our species based on his recent introduction to earth science and archaeology through working with the BBC.

The President, Dr Stuart Monro, will be in the Chair

This is a public lecture.