An important and valuable clock by Thomas Reid has been presented to the Royal Museum of Scotland by the Royal Scottish Society of Arts.

Robin Harper, MSP, the Society's President said "Thomas Reid, who made this precision clock in 1791, was perhaps the finest clock-maker that Scotland has produced. The RSSA is delighted to present this significant regulator clock to join one of the Museum's most important collections."

The clock is called a 'regulator' because it can run at a true rate whatever the temperature. Clocks of this quality were normally used at Astronomical Observatories, but this one was the master clock on display in Thomas Reid's own shop in Edinburgh. The eye-catching pendulum, composed of a grid of fine rods of different metals, is to the design of the famous John Harrison, the discoverer of the clock that enabled mariners to establish their longitude.

It was gifted to the RSSA by Reid's nephew and successor William Auld shortly before his death in 1846, and the clock face has an elaborate inscription recording this gift. The clock has previously been on loan to the Museum, but is now being formally gifted to the national collections.

Dr Gordon Rintoul, Director of the Museum recorded his thanks to the RSSA for this most significant donation.

In fact, the Museum has a long interest in Reid's astronomical clocks. It already has the clock for which Reid is best known — the 1811 master clock for Lord Gray's Observatory at Kinfauns, Perthshire. This was the prototype clock which incorporated a special and complex 'spring-pallet' escapement which Reid invented. The museum's expertise was also central in the legal case which established the City's ownership of a subsequent clock in this series made for the Calton Hill Observatory in 1813. 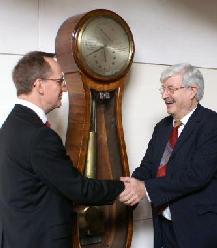 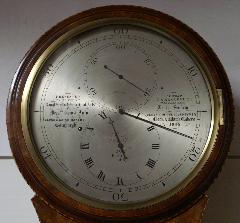